I felt intimated and scared to go into the clinic. I felt judged and uncomfortable. Not a nice feeling at all.
If it was my first appointment I probably wouldn’t have come in. I had to phone a family member as I didn’t want to walk past.
A lot of protestors, felt extremely intimidated & suffering from severe anxiety & depression already. These people do not help.
I feel that they do not understand how hard it is to make this decision and their presence makes it so much harder.
When arriving people were outside with signs it made me scared to come in and I was physically shaking. They shouldn’t be allowed to stand outside and people to be made to feel like this.
Having leaflets shoved in my face disregarding a much-thought about decision and being told I’d be ‘prayed for’ is an invasion of privacy in my view tantamount to harassment
I am in a total state, heart pounding. Total disgrace that someone has just started harassing me about abortion. Someone needs to stop this now.
They left a poor girl in tears after speaking to her. I told them it was none of their business. This is extremely upsetting for everyone after having to make such a difficult decision.

The following organisations have signed the statement below

Over recent years there has been an escalation in anti-abortion activity outside clinics in the UK. Women attending pregnancy advice and abortion centres are now regularly exposed to groups of anti-abortion activists standing directly outside. Many of these protesters bear large banners of dismembered foetuses, distribute leaflets containing misleading information about abortion, and follow and question women as they enter or leave the centres. Often, these people carry cameras strapped to their chests or positioned on a tripod. Women report feeling intimidated and distressed by this activity as they try to access a lawful healthcare service in confidence. Staff at clinics have on occasion needed escorting from the building by the police. Recently, NHS staff on premises where a clinic is located have felt so intimidated by the presence outside they have asked for the abortion service to be withdrawn. The closure of a service as a result of anti-abortion activity would be unprecedented.

We are a society which values freedom of speech, but also one where the vast majority of us support a woman’s access to abortion services. The right to protest needs to be balanced with the right of pregnant women to obtain advice and treatment in confidence and free from intimidation. For those who wish to campaign to restrict women’s reproductive choices, there are plenty of opportunities and locations in which to do so. The space immediately outside a clinic need not and should not not be one of them.

Women should feel confident that they can approach centres for advice and services without fear of intimidation, or anxious that their identity will be compromised by protesters filming outside. Establishing access zones free from anti-abortion activists around clinics would provide the reassurance and security women need. We urge all political parties to act to protect women as they make their own personal decision about their pregnancy. Women deserve nothing less.”

More support for Back Off 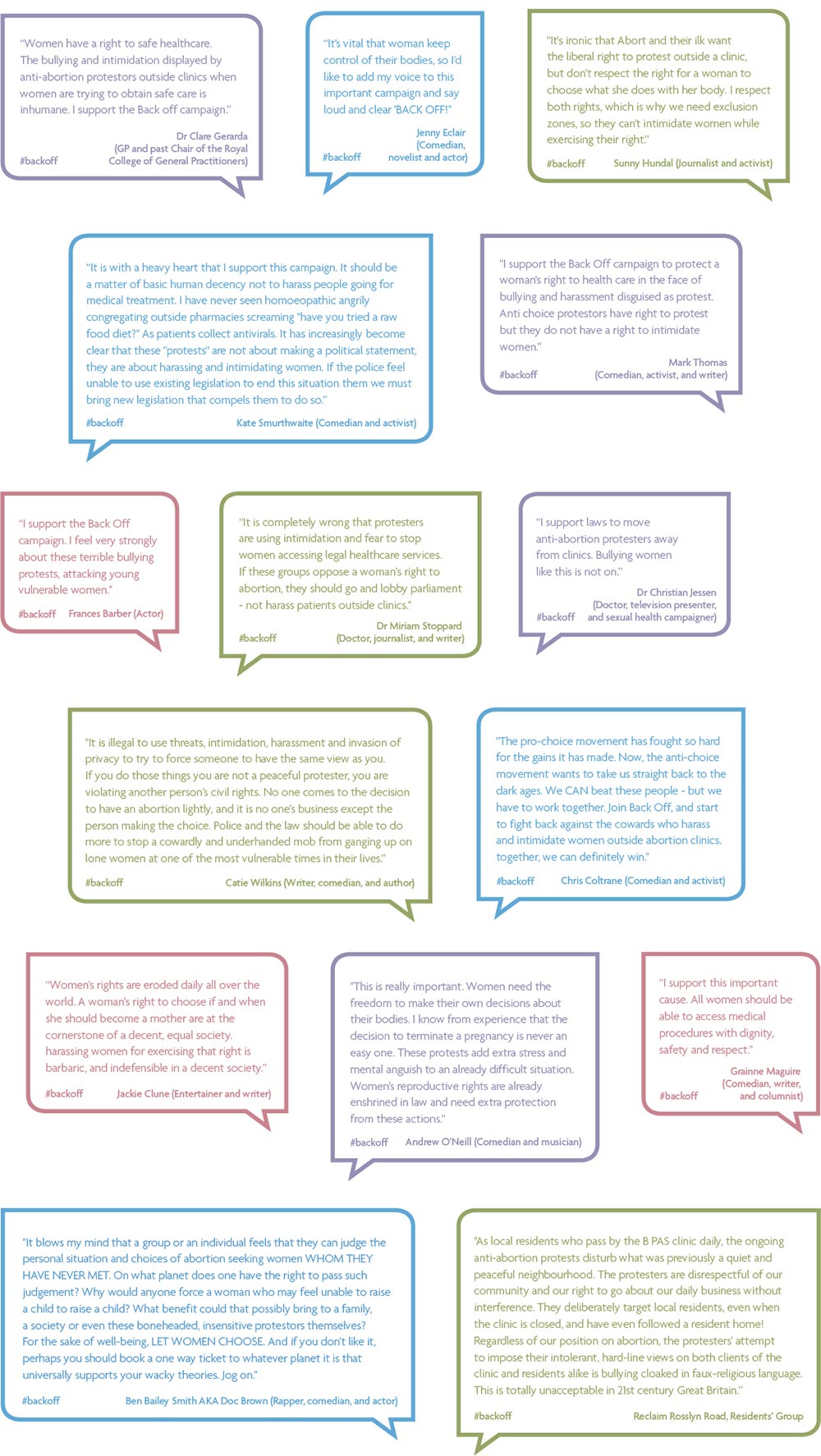 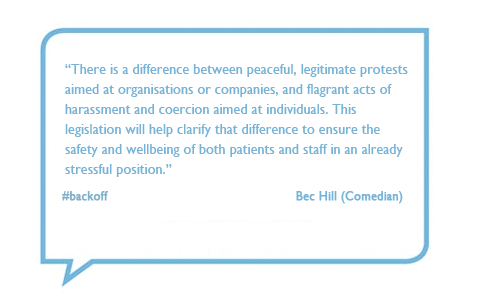